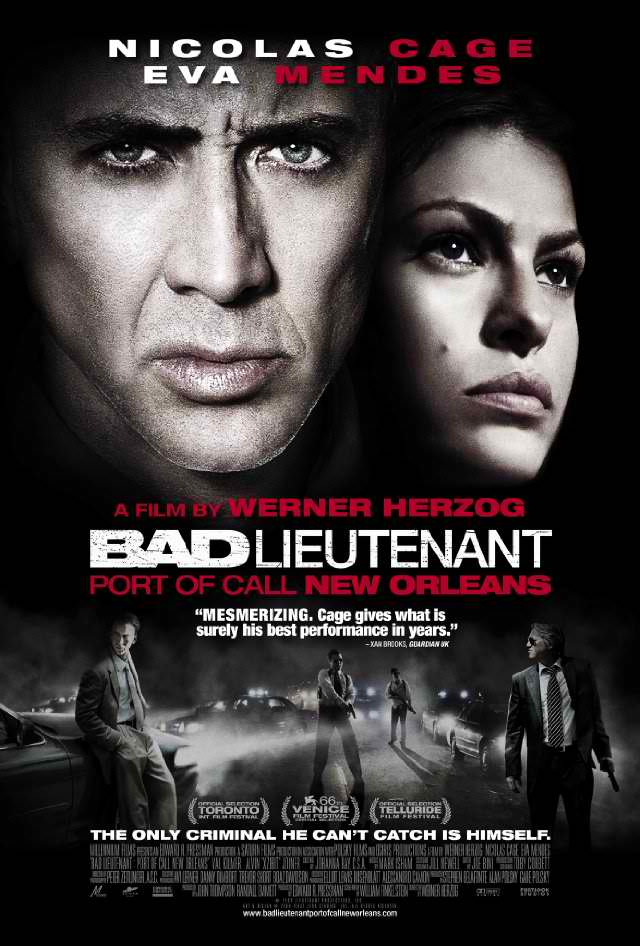 A 2009 American Drama, the Bad Lieutenant: Port of New Orleans was believed to be a rethought of the 1992 film Bad Lieutenant. It is showcased by one of the biggest stars in Hollywood (Nicholas Cage) and joined together by Eva Mendes, Jennifer Coolidge, Tom Bower, Val Kilmer, Xzibit, and Brad Dourif. The movie has a politically-inclined setting centered on the role played by Nicholas Cage named Terence McDonagh.

The movie started with Terence McDonagh as a tough New Orleans Police Sergeant dedicated to his career but efforts remain unseen until an unfortunate event changed his life which would later make the audience decide whether it was a good or bad thing. A Hurricane named Katrina hit several cities including a certain prison cell. While cleaning out a locker within the vicinity, Terence McDonagh saw a prisoner who was apparently not transferred to a safer place after the hurricane. He saw the prisoner was about to drown and he jumped immediately to save the prisoner. The administration later knew his heroic act and was promoted to Lieutenant though he suffered back injury that required him to take Vicodin as doctorís prescription for the rest of his life.

Like most movies, the Bad Lieutenant: Port of New Orleans fast-forwards 6 months later showing how addicted Terence McDonagh is to painkillers. Not only that, Terence McDonagh became a habitual drug user of cocaine and cannabis. He has convinced a person who works in the same department as his to sell him drugs all the time. Terence McDonagh is not alone in this addiction as his girlfriend Frankie, who is a prostitute, shares drugs with him. The relationship mostly revolved about how they have the same interest in only one thing, drugs.

The film shows how drugs affected Terence McDonaghís relationship to his family. He left his father, who at the film, was already recovering from alcohol addiction. Terence McDonagh exhibited abuse of authority by using his power to bully other people, which are all the effects of his drug addiction. He even steals drugs as seen on the film. When Terence McDonagh was assigned to investigate a murder case, things get a little complicated, leading to the climax of the storyline. The murder scene involves 5 illegal immigrants that were executed. Upon investigation, Terence McDonagh found an auditory witness in the person of a delivery boy. The delivery boy revealed that the people were murdered for selling drugs in their neighbourhood where the gang leader resides. Later on, the gang leader Big Fate with his two associates Midget and G were arrested. Big Fate finds submitting himself to the authorities with the assistance of a lawyer.

Meanwhile, Terence McDonagh returned to his hotel and found his girlfriend Frankie beaten by one of her clients named Justin. Terence, upon seeing the act, threatens Justin and took $10,000. At the same time, the delivery boy acting as the sole witness has gone missing and to get as much evidence as the murder case needs, Terence went to find the delivery boyís grandmother to get information. Terence even tried threatening the grandmotherís patient at a nursing home but the grandmother only warned Terence to leave the State and go back to his hometown in England to prevent involvement in this gang issues.

Things get a little blurry for Terence because his problems came all at once. He hasnít paid his bookie yet which has been accumulating interests and at the same time, the gangster who works for Justin whom he took $10,000 came back demanding for $50,000 in exchange of his safety. Terence cannot do anything at this point because he does not have the authority anymore. He is now on modified position and his gun was confiscated after threatening to kill a patient in a nursing home. With no one to run to and with a very little capacity to escape from liability, he seeks the help of the suspect Big Fate. Together, they make a great partner and started to mobilize their own illegal agendas. Terence McDonagh supplied Big Fate with police information as a form of revenge against the government and as part of their collaboration. In effect, Terence McDonagh now has enough money to pay his bookie including the payment for the agreed $50,000 he has with the gangster.

Upon deadline of the $50,000, Terence McDonagh appeared as agreed and instead of merely offering $50,000, he offered more. He offered a bag full of heroine but the gangster, greedy as they are, demand all of them. Big Fate and his team end up killing them. They soon celebrated and Terence McDonagh influences Big Fate to smoke cocaine with the lucky crack pipe.

Unknown to everyone, Terence McDonagh was up for an evil plan. He planted the pipe at the scene of the murder crime Big Fate was accused of. This will serve as enough evidence to finally convict him of the crime of murder. The authorities found the pipe as planted by Terence and was used as new evidence of the crime. Terence McDonaghís partner in the investigation threatened to kill Big Fate to prevent his escape. Terence McDonagh was at the right situation to stop his investigating partner and arrested the accused. This act made him redeem himself of his government duties, making an implication that despite his alleged drug addiction, he is still capable of fulfilling his duties as a Lieutenant. Because of this, McDonagh was promoted to Captain.

Like the usual movie stories, Terence McDonagh became a changed person a year after. The movie forwards the time one year after showing him with his girlfriend Frankie who is bearing their child. They have both stopped from addiction and they live with the McDonaghs. At the end of the film, McDonagh came across the man whom he saved life in the prison cell in the beginning of the story. The man who has already served his sentence in the prison offered to help McDonagh to finally escape addiction.

This Bad Lieutenant: Movie Review shows that in the chronological order of the story, the main actor has developed ups and downs like normal people do. The only difference is that in this Bad Lieutenant: Movie Review, it shows the intensity of every scene as the actor engage in every illegal act. It is important to emphasize in this Bad Lieutenant: Movie Review that those who deal with drugs to the extent of exploiting themselves are really made to suffer its consequences in the end. In this movie, it is shown that the main actor Terence abuses his power upon assumption of a higher position. He uses his position to buy more drugs which all the more make his life miserable together with his girlfriend. He even went to the extent of threatening to kill other people in order to extract information. Here it is seen that the patience, intellect, and morality of a person degrades when he use his power the wrong way and with the attendance of drugs.

Any Bad Lieutenant: Movie Review will have a common denominator of describing the main cast as an outlaw, someone who, in majority of politically-inclined movies is torn apart between doing what is good or joining what is bad. The movie shows that the main actor, like most of other protagonist, is tempted of earthly things, desire, lust, and greed. The movie made it so intense all at the same time to engage its audience more and make them feel the shift of character of Terence in the end. Also, the audience expects the main character to change by the end of the movie which is 100% acceptable because it serves as the moral lesson of the story.

As Bad Lieutenant: Movie Review, it is important to mention how the movie gave value to the role of the family specifically the parents in the upbringing of their children. Though it is not widely shown in the story, the director made it a point to show how absence of a family affects the upbringing of a child. At the end of the movie, it is shown that Terence made a big change in his life by stopping the use of drugs with the help of his family. The movie also represents the forgiving heart of the family, willing to accept come what may.

All in all, the movie is a great combination of action, politics, and socialization though the shift of events is not extraordinary. Some Bad Lieutenant: Movie Review even believed that the movie was a mere reverberation of the old Bad Lieutenant 2000 movie. While some have expressed dissatisfaction, the movie still made it big, with Nicholas Cage as the lead actor. It was not as visually entertaining as the other movies of its time, and could bore a lot of teenager nowadays but when looking into the quality of the movie, critics would still give it high remarks for portraying a reality of todayís generation. Terence McDonagh is a symbol of courage that change is possible.

This movie review was written by John Waller. Apart from exercising his passion for thriller movies (including this one!), John is an avid writer and has written for a variety of online magazines, such as the Huffington Post.

MAKING WOMEN WANT YOU, UPDATES FROM THE FIELD →